The DWP (Department of Work and Pensions) have once again been found to have covered up data from a forced transition pilot which took place in Harrogate.

Not only have they tried to hide this information from the public they’ve also hidden the details from MPs.

In a report by Benefits and Work it has been revealed that there is evidence of the DWP covering up not only the details of the forced pilot which took place in Harrogate, but also details of their incompetence.

This relates to the forced transition from legacy benefits to UC (Universal Credit). The social security advisory committee (SSAC) has been reported saying to MPs that there is a need for external scrutiny of the worrying process this month.

Yesterday a Director of the UK Rabbinical Executive Board wrote a letter to Jeremy Corbyn which, it said, represented the views of the United European Jews organisation (UEJ). The letter said that the organisation “reject and condemn in no uncertain terms” the recent comments in the media, claiming that the “majority of British Jews are gripped by anxiety” at the prospect of a Labour government. The letter states that the media commentary does not represent the views of mainstream Chareidi  Jews who live in the UK.

The letter continues: “We believe that such assertions are due to propaganda with a political and ideological agenda”, which, the group add, “is an agenda diametrically opposed to fundamental  Jewish values, as well as the opinions of tens of thousands of Jews in our community”.

I’ve not blogged for a while. Stuff happened.

In 2014, my husband took a sudden, critical illness. He almost died. Three months in hospital, intensive care for the first month, home with poor mobility and nasal gastric feeding, our lives were turned upside down.

2015 was to be ‘our’ special year. We both turned 60 and were to celebrate our 40th wedding anniversary. We attended a revolutionary outpatient clinic in Glasgow Royal Infirmary which offered psychological and physical support to former intensive care patients and their carers…I had become a carer! It hadn’t really occurred to me, but yes, that’s what I was. No longer a wife, but a carer. Anyway, we both benefited greatly from the course and planned a big party for our anniversary and a holiday to Nashville. My husband was still very weak, but managed and enjoyed both events.

To put things into perspective, we had…

UPDATE:The trust has suspended its attempt to make NHS patients pay. Thanks to you – everyone who shared. But NO THANKS to the handful of idiots who dismissed it as fake news. It was not fake. It was an attempt to make NHS patients (not foreigners, not private patients, you) pay for essential ops (not just cosmetic ops) such as cataracts, hip replacements etc. We have to keep watching them. They WILL try again.

This doesn’t mean just handing over hospitals and NHS services to private firms.

It means stealthily introducing actual charges to NHS patients at point of need.

This is all totally ignored by the mainstream press of course.

NHS trusts are now so confident they’ll get away with it, they are openly publishing…

It doesn’t have to be this way ! 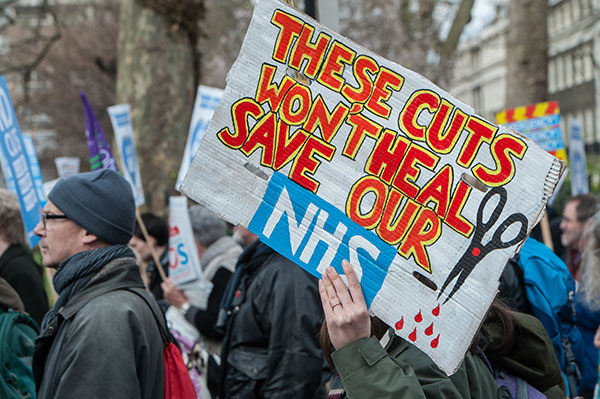 NHS England has published an updated list of medical conditions for which you can no longer receive prescriptions for, as part of a wider cost-cutting exercise due to insufficient funding from central government.

Last year I wrote an article about the stealthy creep of rationing of treatments in the NHS, and how gatekeeping has become a watchword within our public services over the past seven years. It’s being driven by the government’s deep affection for neoliberal dogma, the drive for never-ending ‘efficiency savings’ and the Conservatives’ lean, mean austerity machine. Perish the thought that the public may actually need to use the public services that they have funded through their contributions to the Treasury, in good faith.

One important point I didn’t raise in the article was about how the marketisation of the NHS has given rise to ‘perverse incentives’, which violate the very principles on which the national health service… 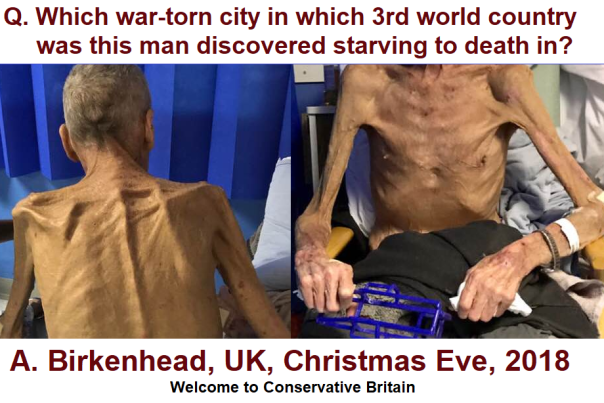 These photographs and this status was posted on Facebook by a law adviser on Christmas Eve:

Please spare a thought for this 64 year old severely disabled client of mine? Please share this post to see if we can garner a response from the Tories although, I doubt we will.
My client was thrown off ESA by ATOS 18 months ago. Since then, he has been expected to sign on. Obviously, he’s been sanctioned and forced to go hungry. so much so he weighs 6 stone. On Friday, not surprisingly he was at death’s door with pneumonia. Fortunately, I was able to get him into hospital.Evidently, his left lung was full of fluid with his right not much better, he’s now on the mend.
He has been unable to heat or look after his home properly because his health has deteriorated which I suggest is obvious from the photographs…

The historic hearing into whether 3.9 million 50s born women have been cheated out of their state pension by the government has been set by the High Court for May 24 and 27.

The date is later than expected because the Department for Work and Pensions expected to win the hearing for permission to bring the review on November 30 brought by BackTo60 campaigning group and thought they would stop the process in its tracks.

Now the Department has been allowed more time to prepare its case as all of its initial arguments to stop the review were thrown out by the judge.

A succinct and accurate portrayal of what Universal Credit is, who it’s for and its detrimental effects.

"This what the govt are doing to our country, targeting vulnerable people" Charlotte has severe multiple sclerosis. She has not received #UniversalCredit since September 29th and is currently waiting to be assessed for work… https://t.co/Gb8RK69vmwpic.twitter.com/6YJUIDlB6y

Caroline Austinsays: “This is Charlotte, my daughter, who has severe multiple sclerosis. She cant walk. She has a catheter, she can’t hold anything. She can’t feed herself, she’s weak. She has days where she can hardly talk or breathe properly. She is heat sensitive, the list goes on.

“I want as many people to see this …. universal credit has not given Charlotte any money since 29th September, despite me telling them [DWP] how severely disabled she is … even if she gets her money, she still will lose the severe disability allowance of £120.00 per month. I have…

Special Rapporteur Philip Alston has presented a United Nations Report on Poverty in the UK. The UK Mainstream Media have not really excelled in analysis or presentation of the findings. After almost a decade of Nudge by Press Release, the Guardian has missed the vital message while the BBC has simply recycled old Government Press Releases. The Mainstream Media seem to be shy about embracing the most damning finding of the report.

In December 2017, Professor Alston carried out a visit to the USA – California, Alabama, Georgia, Puerto Rico, West Virginia, and Washington DC – carrying out the same kind of investigation as has just finished in the UK. The most damning finding of the UN-US Report on Poverty was similar to the most damning finding of the UN-UK Report on Poverty. Had the Guardian excelled in Journalism they might have highlighted that the UN was not simply… 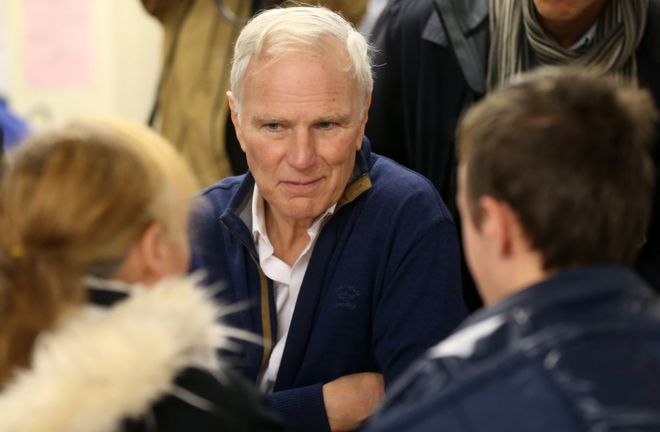 UN Rapporteur, Philip Alston, visited Newcastle. He has said it is not “an acceptable position” for the government to use foodbanks as a social safety net.

In July I reported that the United Nations extreme poverty and human rights Special Rapporteur, Philip Alston, was to make an official visit to the UK.

Alston is a Professor of Law at New York University, and he works in the field of international law and international human rights law. He has extensive experience as an independent UN human rights expert. He previously chaired the United Nations Committee on Economic, Social and Cultural Rights for eight years (1991-98) and was United Nations Special Rapporteur on Extrajudicial, Summary, or Arbitrary Executions (2004-10).

His resume can be found here.

Some of the previous destinations for Alston have included Saudi Arabia, China, Ghana and Mauritania. He is currently visiting the UK, the sixth richest country in the world. His…